July 24, 2020: There has been a decline of Rs. 442 billion in FBR revenues due to the pandemic, which is less than half as compared to the loss of Rs. 900 billion that was mentioned in the Budget Speech 2020-21. The total shortfall in tax revenue exceeded Rs. 1.6 trillion, which also led to a massive decline in fiscal transfers to provinces. However, the pandemic has just exacerbated the poor performance of FBR since the shortfall would have been around Rs. 1,200 even in the absence of COVID-19. IBA Executive Director Dr. S Akbar Zaidi expressed his views at the e-launch ceremony of book titled Policy Response during Challenging Times: Insights from the Federal Budget 2020-21 and the Way Forward, organized today by the Department of Economics, IBA.

The authors of the book - Dr. S Akbar Zaidi, Dr. Asma Hyder, Dr. Qazi Masood, Dr. Muhammad Sabir, Dr. Wali Ullah, Dr. Adnan Haider, Dr. Aadil Nakhoda and Mr. Asif Iqbal, during a panel discussion, highlighted that in order to achieve the targeted GDP growth of 2.1% in FY21, the government needs to increase public investment by about 29% to 32% along with easing the provision of credit to the private sector by about 32 to 35%. However, the private credit channel may not work in this pandemic situation as private investors are hesitant to invest in this uncertain and vulnerable situation.

The speakers also pointed out that according to their estimates, even the medium level impact will push 45.5 million additional individuals below the poverty line, with the total number of the poor approaching 94.6 million (41.4% of the total population). At the provincial level the worst situation – in terms of the percentage of poor population – is projected in Balochistan (68.9%), followed by KP (49.8%), Sindh (44.4%), and Punjab (34.5%).

Some recommendations were also made for restoring exports, which included improving export competitiveness, enhancing the role of TDAP, diversifying exports towards products exhibiting a certain degree of potential and focusing on few agro-based products in which Pakistan has performed relatively well in terms of the Revealed Comparative Advantage and relative unit values.

Dr. Zaidi emphasized the need for an innovative policy stance which should be opted to support households from different socioeconomic classes during this difficult time. He showed his concerns about an expected increase in inequality and a decline in socio-economic indicators due to the COVID-19 shock. The panelists recommended that commercials banks need to play their role through innovative financial products to support the vulnerable and quasi-poor groups. Since the government has already announced Rs. 209 billion support in the recent budget for FY21, it is expected that this amount will address the issues of the ultra-poor category conditional on the accuracy of targeting. However, the current situation shows that the sustainability of cash transfers and social uplift of the ultra-poor will remain a huge challenge in the coming years.

Few officials from Ministry of Finance also attended the webinar and showed their interest in macroeconomic forecasts. It was decided that IBA will provide their support to the government in future macroeconomics framework and projection of key indicators. 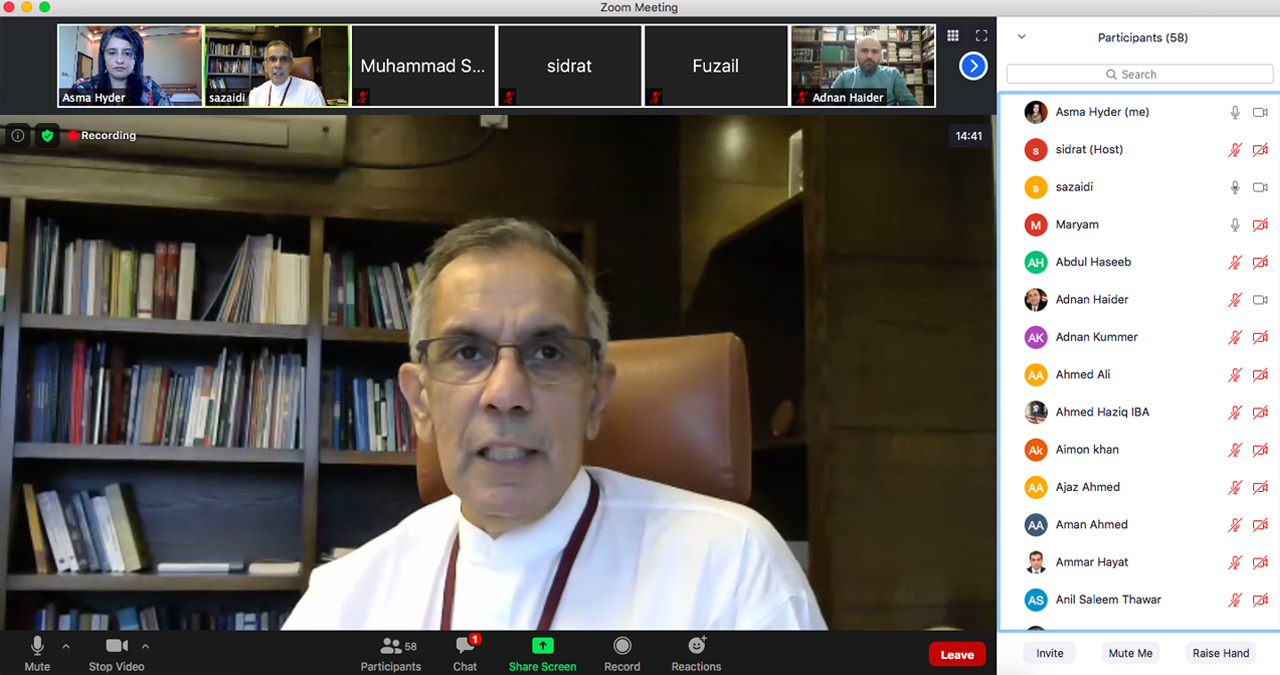