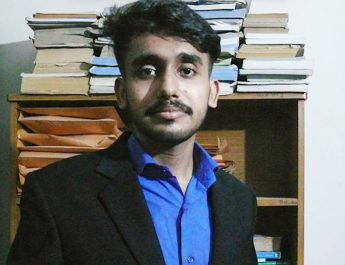 Preparing a critical edition of a polyglottic religious text is a complex scholarly task. Ali Jan S. Damani has prepared a critical edition of such a text, named, Manhar, attributed to Syed Ghulam Ali Shah (d. 1792), a well-known ginān composer and Ismaili missionary who was active in the regions of Sindh, Kuttch, Kathiawar during the 18th century. What makes this project unique is the fact that Manhar has not yet been approached by any scholar in any manner. In fact, hardly a few lithographed copies of the text have survived up to date. Therefore, the fundamental challenge was to produce an English transliteration from the khojkī version, which is now available at: (http://ginans.usask.ca/commons/520540), that could be used to prepare a critical edition.

Scarcely a few ginānic compositions have been critically edited using manuscript sources. Alijan S. Damani's work thus contributes to the emerging field of ginānic studies. The final volume containing the history, English transliteration and translation, critically edited text of Manhar will be published in near future. The gist of this 56-verse long mystical text can be found in the closing lines of the opening verse which read:

[Allah!] Only you are my true [Lord]!
Those who chant Allah! Allah!
And remember [Prophet] Muhammad's name [in the heart]
Those who cast their vision upon Manhar
[All such believers shall] attain the eternal abode.

Ali Jan S. Damani latest publication is a review of a book entitled "The Ismaili Movement in Sindh, Multan and Gujrat". The book is written by Dr. Ghulam Ali Allana, an undisputed authority on Sindhi language and literature.

Ali Jan is currently working to produce the Khojkī script tutorials which are expected to be completed before the end of this year. His other projects include but are not limited to: A critical edition of a unique Ismāʿīlī Ginān, named Manhar; translation of Man Samjāṇī (a ginān) of Pir Shams; life, history and works of Saiyyada Imām Begum; cataloguing of khojkī manuscripts; and, unearthing unpublished ginānic texts from manuscript sources.

Ali Jan S. Damani is interested in the spread of Islam in the South Asian regions. The 'Ginān' literature and the 'Khojkī' script are of special interest to him. He is currently working with Juan Bruce to produce an open source font, which has been commissioned by Google. He is also working on professional tutorials of the 'Khojkī' script. His first academic publication is expected to appear next year.

"When designing a Khojki font for Google's Noto Project, I sought the advice of respected scholars to help me with my research. I was re-directed by one of them to Ali Jan Damani who happened to know quite a lot about the issues I have been trying to solve. In order to make a responsible font in terms of history and functionality, one needs to dig into the past of the script and Ali Jan was extremely helpful in clearing some very difficult inconsistencies. He provided manuscripts and faithful sources of information that allowed me to take much more informed decisions on the operational aspects of this extinct script and he did this voluntarily in a very generous manner."

Ali Jan gives credit of all his achievements to his professors, parents and well-wishers. He is inspired by the teaching and academic works of Dr. Ali G. Siddiqui. His passion is Islamic studies with a focus on Ismāʿīlī studies, for which he has ascertained to dedicate his entire life.